What is Masculinity – What is Chivalry by L.B. Johnson

What is Masculinity – What is Chivalry 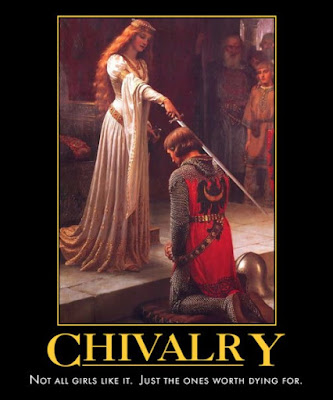 If life is a battle, then my inner scars are medals for valor,
for swiftness, for courage, for passion.
Evil is the dark-haired brother of Good;
they walk hand in hand–always.  Calanthe – Wraeththu

What is Chivalry? A knight was expected to have not only the strength and skills to face combat in the violent Middle Ages but was also expected to temper this aggressive side of a fighter with a chivalrous side to his nature. There was not an authentic Knights Code of Chivalry as a prescribed document – it was a moral system which went beyond rules of combat and introduced the concept of Chivalrous conduct – qualities such as bravery, courtesy, honor, and gallantry toward women. Documented in ‘The Song of Roland’ in the Middle Ages Knights period of William the Conqueror who ruled England from 1066, it consisted of these tenents –

To fear God and maintain His Church
To serve the liege lord in valour and faith
To protect the weak and defenseless
To give succour to widows and orphans
To refrain from the wanton giving of offense
To live by honour and for glory
To despise pecuniary reward
To fight for the welfare of all
To obey those placed in authority
To guard the honour of fellow knights
To eschew unfairness, meanness and deceit
To keep faith
At all times to speak the truth
To persevere to the end in any enterprise begun
To respect the honour of women
Never to refuse a challenge from an equal
Never to turn the back upon a foe 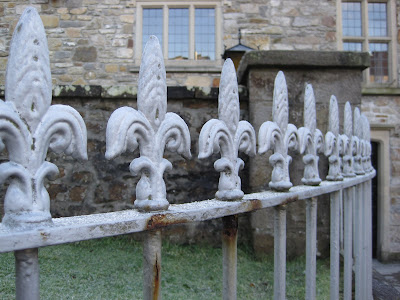 The “code” is written ina slightly different form in different pieces of literature,  but it all has these things in common – courage, loyalty, respect, honor, finishing everything you start and never refusing a necessary battle regardless of the odds.

Widows and orphans were cared for. In days of old, the helpless were looked after, but you worked or you did not eat. There were three orders in society: oratores (those who pray), bellatores (those who fight), and laborares (those who work). Those that prayed, lived beyond simply, not riding around in limos in $1500 suits while telling their followers on national TV to “send more money”. The welfare class, that’s rapidly becoming a huge chunk of our “modern” society, didn’t exist. If you were physically capable, you pulled your weight. Or you died. The knight did not fight for the lazy, but for those who by station, age, or gender were not able to fight for themselves.  There was faith in a higher power, but not so heavenly driven, that a man was useless on earth. 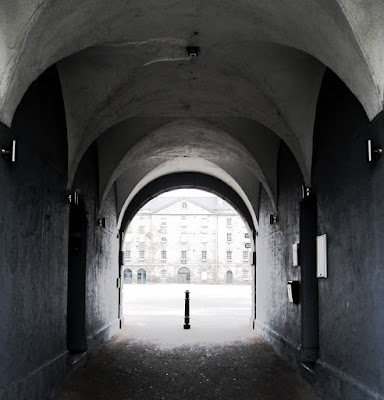 A sword was a tool, to defend and protect. Lesser weapons were considered dishonorable. The dagger was considered a weapon of a sneaky assassin and an arbalest (fired from a distance) was a brutal weapon used by the untrained. A knight’s code of chivalry demanded that he face his enemy openly, honestly and with skill – it was a “let the best man win” situation. Battle was more than the desire to pursue and kill, but endurance, the conviction, and longing to endure beyond all imaginable limits of the flesh to protect and preserve.

There was a difference between aggression and self-defense, a difference between being devoted to justice and being a schoolyard bully. It is self-awareness and self-restraint and differs as night and day from apathy, the concept of which Christians might refer to as meekness, a trait often associated with Christ, and clearly as misunderstood.

There was the ability to think before one speaks, to consider the gravity of words and actions; and even to know when inaction or silence is the best avenue. Such things, many, including myself, have failed at. Such things we can still strive for if we can recognize them.  For some are so bound by their ego or the expectation as to what society owes them that they are no more capable of shame, then they are of courage and honor. What they are left then is the emptiness of loss, of something they could almost touch but didn’t know how to grasp.

For some, they learn this early, taught by their fathers or mentors.  Others learn it simply the hard way.  For the dictates of chivalry are not some formal guide to etiquette. I hope I die before I see a “Chivalry for Dummies” book. It’s not a checklist, it’s an understanding of things for which a man needs no checklist. It’s not bowing before your nation’s enemy, it’s never turning your backs on them. It’s not holding the door open for a woman because she’s weak and lesser than you, but as a sign of courtesy.  It’s a way of thinking, not an era or a specific rule.

I’ve written on this blog more than once about the wimpification of the modern male. But being a strong man does not mean you are completely closed off to emotion, treating love like something that’s common and a woman as a somewhat lesser accessory. The strongest man I know can convey in one look, one touch, what I mean to him. But one can understand where the mixed signals come from. The view from the media is one of abject consumerism, relationships that manipulate, duty as control and the worst “if there’s a man involved, it’s his fault“. Our nation has more material comforts than the knights could ever imagine, but for many people, it’s prosperity without purpose, it’s passion without principles. 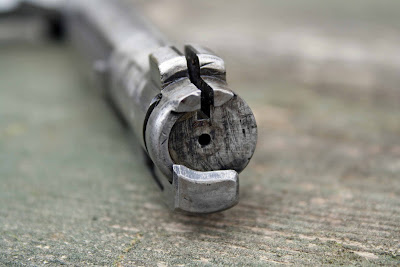 People espouse the Middle Ages as being little more than Pestilence, Black Death and no YouTube with the concepts of that day being outdated, or worse, by their own basis, misogynistic. What do we have now to replace it? Materialism without ethics or effort, and baby daddy’s, greedy trophy wives, teen moms, and uncouth, plastic infused bimbos who get their own reality TV shows without any bit of skill or talent. This is our alternative to “the Dark Ages”, a generation of people who fail to understand the difference between “can” and “should”?

Epictetus said it best “for it is better to die of hunger, exempt from fear and guilt than to live in affluence with perturbation.”

But the spirit of chivalry has not been entirely eradicated from the human heart, even in our pacifist, feminist, age. A chivalrous man today is a warrior with something to live for – and is willing to sacrifice his life either to protect or further it. Being a warrior does not necessarily make him a man of war, but a man prepared to do battle for that which he loves. The battle can be one of ideology, not weapons, his life simply marked by preparation for something worthwhile, and thus is lived pursuing those ideals and interests which for him hold true value.

If this man is willing to die for something he loves, it is because he loves deeply and with great passion. Romantic love may well make the short list, but it’s not the sole occupant of his soul, there are other causes and objects of a man’s passion, that make him truly rounded.

Chivalry is not dead, it is simply dormant in many, for all things that are excellence can be as difficult as they are rare. In my writing, I’ve referred to the knight as he, for it was a manly profession. Yet the ideas that define chivalry know no gender; it’s a way of thinking expressed in form by both men and women who hold true these concepts of defense and accountability. 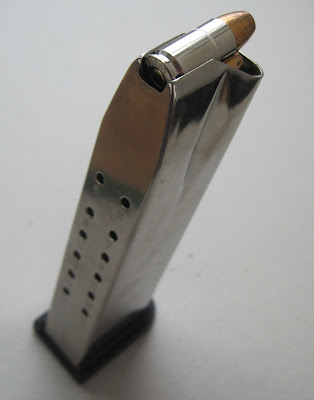 Some will call me hopefully old fashioned. Feminist and those more liberal-minded will decry it as a way of life that is simply bloodshed, war, and women seen as a possession. It’s not. A chivalrous man has no desire to control and direct a woman’s thoughts, but to allow her to live without constraint, loved unconditionally, free from pesky dragons and telemarketers. He will not only arm himself with the tools he as to protect her, but he will also smile when she takes up her own. He will fight for her. He will fight with her.

Chivalry is NOT dead.

Look at our military personnel, look at those people who responded after the terror attacks. Firemen, EMT’s, the police. Nurses, doctors. A post-September 11 nation’s no place for milquetoasts. We are living in a fallen world with entire societies that wish us harm, religions of “peace” that dictate to embrace them or die. This is not a time to sit home watching reality television when the dragons aren’t just bigger, they’re almost nuclear ready. 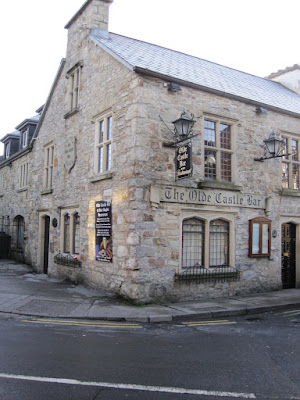 In the Battle of Maldon, a few Englishmen have been attacked by a fierce army of Viking invaders. Although the Vikings are between two branches of the river and thus separated from launching their full strength at the Anglo-Saxon army, Beortnoth nobly allows them free passage to do battle on equal terms. Vastly outnumbered, Beortnoth and his brave men are slain until only a small, unflinching band of warriors remain:

“Byorthwold spoke; he grasped his shield; he was an old companion; he shook his ash spear; full boldly he exhorted the warriors: ‘Thought shall be the harder, heart the keener, courage the greater, as our might lessens. Here lies our leader all hewn down, the valiant man in the dust; may he lament for ever who thinks now to turn from this war-play. I am old in age; I will not hence, but I purpose to lie by the side of my lord. . .”

In these few words, a better description of heroism, of unwavering dedication and loyalty I’ve not read in a while. The lines “Thought shall be the harder, heart the keener, courage the greater, as our might lessens” are a thousand years old, a pre-Christian heroic spirit which author J.R. Tolkien, a crafter of worlds where chivalry roared, himself called “Northernness”.

Chivalry exists, and heroism stands. Heroism and chivalry live not in might and size and power, but often in the smallest places and quietest moments.  Look at the people who serve in hard times, hard areas, death a shadow on the wall so the masses can be safe. But you don’t have to be a member of the military, a protector of the weak, or a fighter of the worst nature can throw at you to embrace these concepts. Chivalry gives us something to strive for, something to hold up as an ideal and an understanding that throughout history there are those who have risen above the standards of the day to truly be called brave. 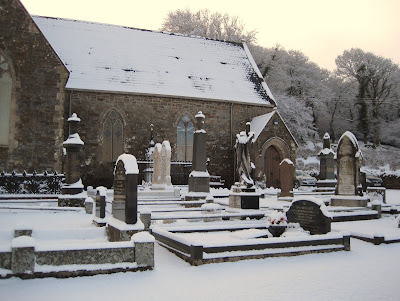 The year could be 1066, it could be 2001, it could be today. A hand on a rough shovel, flinging the dirt with an effortless fury, the mound of soil rising of its own volition, not crafted by man but as if flung forth by the earth itself, until the grave is readied. A warrior has fallen, medals scribed on ore or heart, small things insignificant to the view, but mute with profound meaning. The earth waits but a moment. Shadows fall with the moon’s curve, no sound but the labored breath of form of one who engaged without arms, this single combat. Laying a warrior to rest.  There is now but a shield to be picked up and carried on. So, man or woman, we never forget.